We have all been living through a WAR. It is not a bullets and bombs war, it is a war of information and belief control. It is fought with misinformation, propaganda, the creation of intentional chaos and confusion, lies, and media capture/control to spread the misinformation, fear and divisiveness (divide and conquer). That is called 5th Generation warfare.

Our world and lives are changing and will continue to do so. For the folks who believed the mainstream media lies and were not ready to think for themselves and show discernment, they will leave this life and this world. Many have killed themselves but don’t seem to know it. Yet.

Another part of this WAR we in the western world are living through, especially in North America, involves this movement called being WOKE. It’s a political ideology and fad that is the opposite of all it pretends to be. It is tyranny and intolerance masked as virtue and tolerance. Teal Swan describes this Woke mess well. All part of the WAR we are in. It contributes to the divisiveness, destruction and hatred needed to create a war climate and all the confusion and destruction that comes with that.

For those who submitted to the lies and misinformation, the harm and death from the VAXXes is working its way through that population. Ed Dowd describes and shows the terrible harm and death from the VAXX. Ed published an easy to read book that shows the data. Most people will be able to understand this if they read that book and listen to one of Eds many interviews describing the death and harm unfolding now in the VAXXed population.

See the increase in disability in the USA by clicking here.  That’s  one small part of the truth showing the harm created by the VAXX. 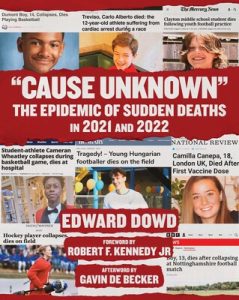 Click on the image above to get the book

The doctors of this country — of all Western Civ, really — owe their citizens an apology… READ The Article>>